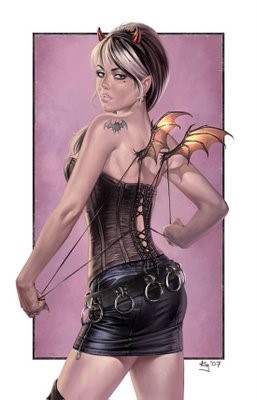 Hello! I'm Alastair Fell, Aly for short. I'm a Manchester UK based illustrator and concept artist, who can do a bit of 3D modelling on the side.

I have over 20 years experience in the animation and games industry, having previously worked as an animator at Cosgrove Hall Films on Dangermouse, Count Duckula, The BFG, Discworld, and various other projects including specials for Chuck Jones, The BBC and ITV alongside many commercials and promos. I also doubled up as a character and model sheet artist whilst working in animation. In more recent years I have worked as a 3D animator and artist in the games industry for companies including, Core Design, Eurocom and TTFusion on projects such as Herdy Gerdy, Pirates of the Caribbean, Lego Indiana Jones, Lego Rock Band etc.

Most of my personal work is purely character based and often features women that I like to present in a complex way, often playfully and at other times with more of an edge!

The item has been added to your basket